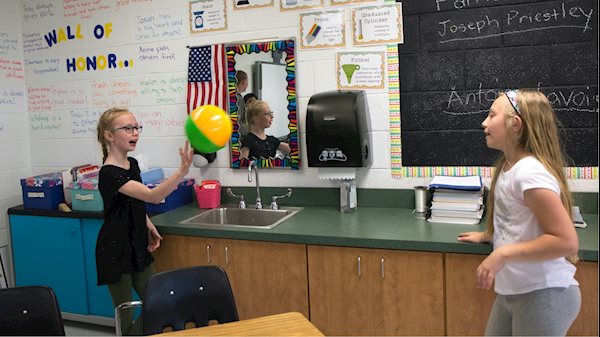 Kids are supposed to get an hour of physical activity a day, but fewer than a quarter of them do. According to the Centers for Disease Control and Prevention, classroom-based physical activity can boost their activity levels and is associated with longer attention spans, increased focus and memory and higher academic achievement.

But practically speaking, how can teachers add physical activity to their already overstuffed agendas? And if they manage to do it, will it actually help their students? West Virginia University researchers Nancy O’Hara Tompkins and Lesley Cottrell launched a project to help answer these questions. Their goal: to increase physical activity in West Virginia classrooms.

“Everyone agrees that preventive medicine has value, but it’s a longer investment, and we know behavior change can be difficult,” said Cottrell, an investigator with the West Virginia Prevention Research Center and a professor in the School of Medicine and School of Public Health. “Focusing on kids makes complete sense.”

An ounce of prevention …

The project—called Activate!—was part of the CDC award to the West Virginia PRC, one of the 25 PRCs around the nation that the CDC funds.

“PRCs partner with communities to conduct research that is meaningful to them and where the research findings can inform sound public health policy and practice,” said West Virginia PRC director Geri Dino. “Our PRC didn’t just come up with the idea for Activate! on our own. It’s something that was important to the communities that we serve. That takes it out of the realm of interesting science and into the realm of interesting science that makes a difference.”

As part of Activate!, teachers from 22 fifth-grade classrooms—in 11 West Virginia public schools—received step-by-step instructions for classroom activities designed to encourage movement in their students. Each teacher got a box of supplies for the activities, including Chinese jump ropes, beanbags, playing cards and giant foam dice.

After meeting with the researchers to learn more about the activities’ purpose and how to carry them out, the teachers wove them into the fabric of their instructional time.

“We divided the activities up by calling them ‘Brain Boosters,’ which were short bursts of physical activity that can be used in transition times, and ‘Integrated Physical Activity,’ where the physical activity is actually integrated into academic content, like math and science and spelling and reading,” said O’Hara Tompkins, a research assistant professor in the School of Public Health and investigator with the West Virginia PRC.

“It wasn’t an intervention that was done in physical education class. It was actually focused on the fifth-grade classroom,” she said. “But we did include physical education teachers in the training because they’re the content specialists in physical activity at their schools, and we wanted to build that collaboration.”

A Brain Booster might involve crumpling a sheet of paper into a ball and seeing how many times a student could use a book to bounce it in the air without dropping it. During an Integrated Physical Activity, the same student might write a math problem on a slip of paper, put it inside a “sock ball,” toss the ball across the room, retrieve a ball at random and solve the problem inside.

Based on a review of the academic literature dealing with students’ physical activity, the researchers tried to anticipate—and address—the hurdles teachers might have to clear in implementing the activities.

For example, the activity cards and supplies provided low-cost, easily duplicable resources for teachers in cash-strapped school districts. Because classrooms can be small, the researchers provided tips on safely working in a confined classroom and brainstormed with teachers to modify activities in response to specific space issues.

‘Getting the wiggles out’

During the study, all of the students wore Fitbits at intervals that the researchers dictated. So did fifth grade students at 11 other schools that didn’t implement the intervention. Those students served as a control group.

O’Hara Tompkins, Cottrell and their colleagues are still analyzing the data, but once their analysis is complete, they intend to draw a range of conclusions based on the evidence they unearth and share these results with the scientific, public health and lay communities.

“We don’t have the big outcome yet, but we do know—based on preliminary analyses—that teachers in the school intervention significantly increased the amount of time that they incorporated physical activity into their classrooms,” O’Hara Tompkins said.

But not everything that counts can be counted, so the researchers are rounding out their quantitative data with qualitative data. They’ve already solicited feedback from the teachers, parents, students and principals involved in developing and executing the project.

From the perspective of Christa Good, a fifth grade teacher in Wirt County, the program helped her students retain more of what she was teaching them. She also found that it helped draw out one of her “hard-to-reach” students who didn’t normally participate in class.

“I started to notice that whenever we had an Activate! lesson, at first, he was hesitant, but as the school year went on, he started participating in the activities and putting a lot of effort into them,” she said. “After he started really participating, he really became part of the classroom. It was great to watch this happen.”

Another teacher—Elisha Nelson, from Wood County—emphasized how much the Fitbits motivated her students to be more active.

“I can tell when my class needs to get the wiggles out,” she said, “so I can pull something from the box and incorporate that into a lesson. I know my students like seeing the data from Fitbits, and they would encourage themselves to move more.”

“I had some low-income students in my class,” Nelson said. “I already had some kids who had their own personal Fitbits—not many, maybe three out of 20. And when I told them that they got to wear Fitbits, even though it was just a few weeks at a time, they beamed, especially one student who didn’t even know where he was going home every night. And when he wore that Fitbit, he felt so special, and he was so encouraged to participate in the program. He just worked really hard, and I think I saw some of his best work the weeks he wore the Fitbit.”

It can establish a lasting tendency to move more and sit less. It can inspire kids’ friends and family members to become more active, too. It can slow or stop the accumulation of risk factors for metabolic and cardiovascular conditions, such as obesity and inactivity.

The researchers’ findings may influence education policy at the local, regional and state levels—particularly in West Virginia, which ranks at or near the bottom for childhood obesity, childhood poverty and other indicators of children’s wellbeing.

“We want to work with partners to change the health of this state,” Dino said. “Enough of being 50th.”

Research reported in this publication is a product of the West Virginia Prevention Research Center and was supported by Cooperative Agreement Number 1-U48-DP-005004 from the Centers for Disease Control and Prevention. The content is solely the responsibility of the authors and does not necessarily represent the official views of the West Virginia PRC or CDC.